The eagerly anticipated Asia Pacific Fashion Forum (APFF) presented by DHL, a highlight of MAFW this season, will run from Monday 24 to Tuesday 25 and MAFW\’s official collection show schedule and exhibition kick starts from Wednesday 26 to Friday 28 of October, as part of the international buying circuit.

The event is timed to enable first winter deliveries in store for early 2006 and the trans-seasonal nature of many of the collections featured also ensures relevance to European and North American markets.

Opening the MAFW AW Collection Show Schedule on the morning of the 26 October is the internationally acclaimed design duo Easton Pearson, who will return to the catwalks of MAFW. The schedule of shows will also feature a number of established designers including Wayne Cooper, Charlie Brown, Camilla & Marc, and Josh Goot, alongside emerging names including Caravana and Mjolk to name just a few.

In addition there will be two women\’s and one men\’s Ready to Wear group collection shows, the New Generation Group Collection Show and the debut of the Royal Melbourne Institute of Technology\’s (RMIT) fashion degree graduates. Key make up and hair looks will be presented by the teams at Napoleon Cosmetics and Schwarzkopf Professional. 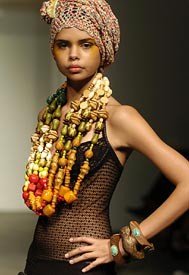